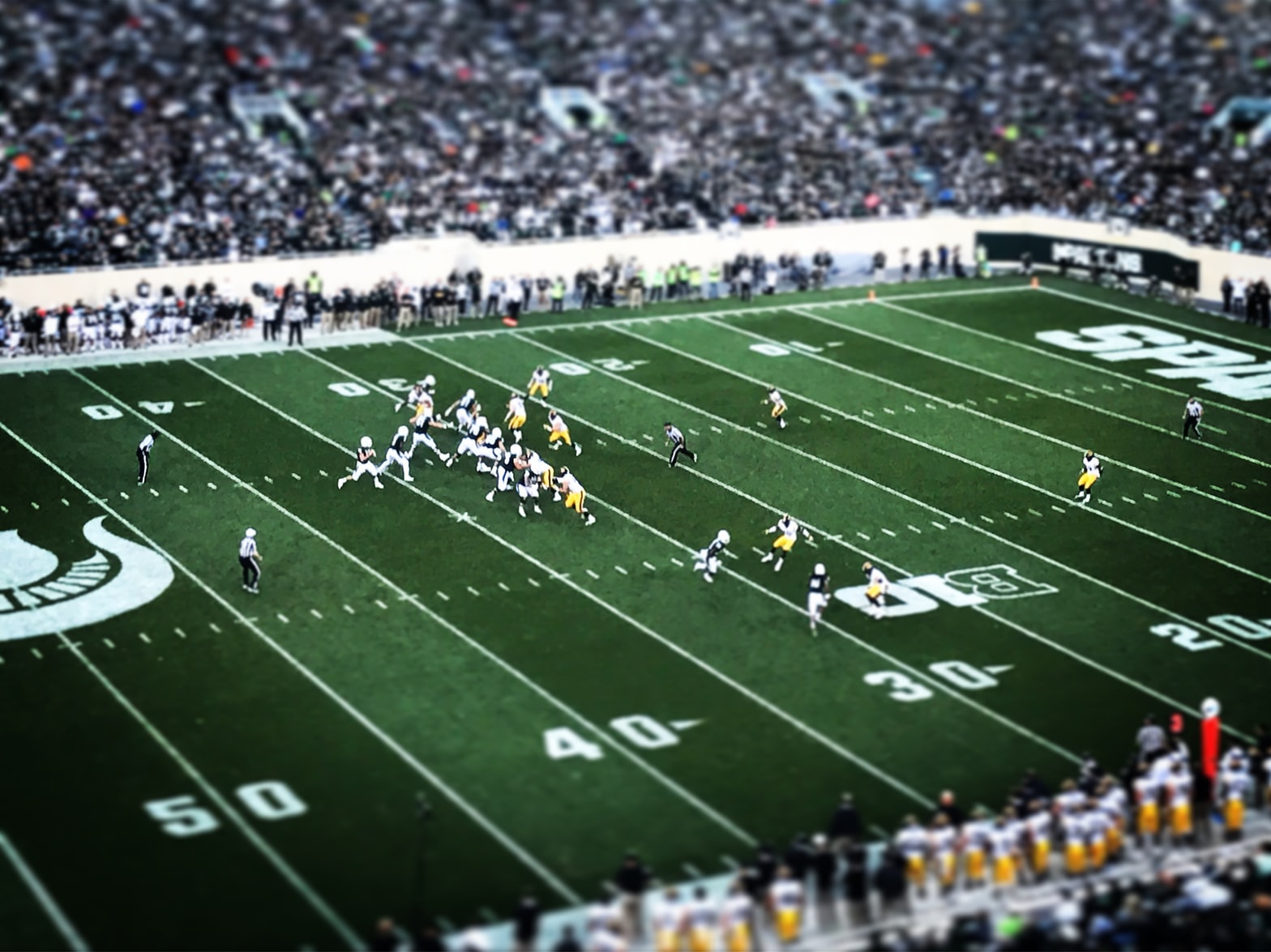 Welcome to the start of a new season.

Lots of excitement around the Fishy Five world.

I started hiking the Appalachian Trail with my oldest kid.  We started at the southern point in Springer Mt, Georgia.  We are going to hike a week a year, continuing where we left off the previous year.  Year 1 was a huge success as we covered 72 miles.

I have been a big bourbon guy for a while, but took my love to another level this year.  In fact, I am nearly finished with book on bourbon.  I am going to title it Three Finger Pour.  We’ll let you know when it is out.

I also spent a lot of the offseason thinking about last season.  I had a dreadful September, then was strong the rest of the season.  I think the game is changing a bit.  The difference between the Power 5 conferences and the rest is greater.  Offenses play faster, and thus score more points.  This is bad news for a dog player early in the season.  So we will take that nugget and parlay it into a great 2019!

First, I look for leadership in a strong coach.  I recall playing on my JV baseball team.  For some reason, I just couldn’t get it going.  At the time, I had no idea why.  I was better than most of the kids on the team, but couldn’t get off the pine.

Fast forward to the next season, and the head coach of the varsity team made it a point to tell me he believed in me.  I ended up batting leadoff and being all-conference.  The point – I was the same guy.  Under bad coaching I was a bench warmer.  With good coaching, I was a freaking star.  One plus one can equal more than two with good coaching, and that is what we want to look for…

Second, I love the D.  Absolutely love it.  Teams that play solid defense make me feel warm and fuzzy inside.

Fourth, I need good offensive lines.  The fat guys are a lot more important than the skinny guys.  Don’t ever forget that.

Fifth, I like a known commodity at QB.  The unknown scares me, and that is so hard to handicap.  I don’t want to be surprised.

So that’s what we are looking for, as well as solid situational plays.

Note I won’t be doing the NFL going forward.  I’ve come to the realization that I’m a college guy.  Panty raids and keg parties are my thing.  The NFL has become too political and polarizing for my liking.  So I am going to choose to stay away.

Here’s to a good season of backdoor covers and cashing tickets.  And don’t forget – keep picking those dogs!

Head Coach Bronco Mendenhall is legit.  He took a putrid program like UVA, and made them 8-5 last year and 9-4 ATS.  It would have been better than that if they didn’t shit the bed the last two games of the regular season, losing both in OT.

UVA was good on defense last year (#3 in the ACC) and gets 8 starters back.  They will be strong again.  They get 3 OL starters back, and have a returning stud at QB.

And best of all – this is UVA.  No one gives them any respect in football.  I will be following this team very closely this year.

Hide all the women and children in Squaresville.  Am I really listing Alabama?  I don’t really watch Bama play too much during the regular season.  I don’t bet on them because I don’t think they ever offer too much value.  And I don’t bet against them because I’m not insane.  I think that will change this year though.

Alabama is dangerous when they are playing for respect.  Clemson pants’ed them in front of the entire country in their last game.  It was complete and total domination.  You don’t think that will serve as a little motivation?

Let’s also look at Bama’s season last year.  Remember early in the season when people were claiming they were unbeatable and the best team in the history of the universe?  They were destroying teams.  Then Tua hurt his ankle, and they were never the same.

While common sense tells you that Bama is never a good value; Saban wins at a 56.5% clip the last 10 years.  Time to stop fighting it and go with it…

Damn I love some Ute football.  They are mean, nasty sonsabitches and never get any respect.

They boast one of the best DLs in the country, and that anchors a phenomenal defense.  They get senior studs back at QB and RB, and they will be healthy after getting beat up last year.  They have a great home field advantage as well.

Most importantly though, they have Kyle Whittingham.  And that guy is a hell of a football coach.  I see good things this season.

I was high on Michigan State last year, and they faded like a fart in the wind.  This season will be different.

They are have a stud head coach in Mark Dantonio.  He regularly wins a game or two he has no business winning.  His teams always play hard and play great defense.

This year’s defense will be special.  They were one of the top D’s in college last year, and led the nation in rush defense.  And they get almost everyone back this season.

The offense was dreadful last season.  That was partly because of injury.  There were a lot of them.  The QB Lewerke was dogshit.  It seemed like the team lost faith in him.  I’m expecting him to play more like he did as a sophomore and not like a junior.  It will help that all 5 offense lineman return.  There is a lot to love about this team.

We all know they are the most corrupt program in football history.  We also know they threw a parade because they are selling White Claws at home games this year.  Then they held a protest because they say “White Claws” is a racist name.  It pains me to say this, but they are probably a solid team to bet on this season.

They were a dumpster fire last season.  A lot of that is due to coaching, but a fair amount is also due to injury and fan apathy.

Mack Brown is 98 years old, but he brought a solid crew in with him to coach.  They lost nine last year, but five were less than a TD.   Note that they did lose to NC State for the eleventeenth time in a row…

The last regime placed no emphasis on defense.  I expect that to improve.  If they do, they will be a solid follow for most of the season.

I’m a huge Matt Campbell fan.  Dude can flat out coach and wins at 60%+ ATS.  They lost their stud RB and WR this year, but get back the QB and all 5 on the OL.  They have the #1 defense in the B12, which is like being the tallest midget but whatever.

I also love backing teams like Iowa State.  They get no media fanfare.  They aren’t sexy.  But they are building something special out there.  I want to go along for the ride.

Arizona is a team that could surprise.  They check a lot of the boxes I’m looking for.  They have a solid HC in Kevin Sumlin.  They have a stud QB with Tate, who was hobbled all last year with injuries.  He has to overcome offensive coordinator Noel “Bubble Screen” Mazzone, but if he can do that he may have another big season.

Best of all – they have been the suck for so long no one is really paying attention to them.  Everyone knows Arizona State is the team to follow in that part of the world.  No one really cares what Arizona is doing.  This is exactly the type of team we like to back.

Clay Helton sucks.  He will be fired before the season is out.  A tough schedule combined with poor QB play for a coach on the hot seat is a recipe for disaster.  On top of that, you never get value with USC as they are one of the most popular teams out there.  USC wins at a something like a 40% clip ATS the last decade.  Fade early and often…

My beloved Wolfpack are in for a very blah season.  Their passing game has been elite the past few seasons.  But QB Finley left and will be starting for the Bengals by midseason.  Their #1 WR Harmon is playing for the Skins, but has no chance as the Skins have no QB. Their #2 WR, Jacobi Myers, is lighting up the world in New England.  Also lost were 3 OL, including all-world center and 1st round draft pick in Bradbury, the starting RB, starting safety and LB Pratt – the leader of the defense.

This is a rebuild year in Raleigh, and I hope they will be better late in the season.  They are probably a solid fade early.

I have loved me some Georgia Tech football over the past several years.   Paul Johnson is such a dick.  He’d run the score up on a team and show no mercy.  Damn I loved tailing a man like that.

However, he left his successor a team built for the option.  It is going to take time for the offense to transition.  And the defense – yikes.  They were putrid last season, and only return 4 starters.  Going to be a long season in Atlanta.

So that’s my early take.  Can’t wait to get the season started.

Thanks for following!
Pat

Pat Hagerty started the Fishy Five about 10 years ago to entertain his buddies.  As he kept winning his audience grew, and now thousands follow his picks each week.  Pat is also the author of Good Teams Win, Great Teams Cover – which is the best book on sports betting out there.

Sign Up For Our Weekly College Football Picks 62% Winners in 2020!